From GOOD to GREAT

My post this month involves a friend of mine. I attended the 110th New Hampshire Police Academy in 1996. Also in attendance was a guy by the name of James Sartell (Jay). Jay was not in my platoon, so we did not interact that often. When we did, I always liked him and felt he was a very bright and gregarious guy.

Now, fast forward 20+ years. I had the privilege of meeting with Jay in Townsend, MA a few weeks ago. Jay had recently retired as the Chief of Police of the Hollis, NH Police Department. Jay had an outstanding career and had many personal and professional achievements. It was nice to talk with him and catch up. But this is not the point of this article. While talking, we discussed some our most influential books (Nerd alert). I told him how Jocko Willink & Leif Babin’s “Extreme Ownership” was one of my top five. Jay told me about a book that he highly recommended I read, especially as a business owner. The book he recommended was called, “Good to Great”, by Jim Collins. I took his advice and immediately bought the book.

Good to Great hooked me immediately. The book is a study of companies that went from “good”, or average, and greatly exceeded the world of average. To quickly define the good to great companies, each displayed tremendous positive growtn with respects to revenue produced and how the companies would exceed the yearly stock market average index. But the kicker was that the companies sustained this level of greatness for years and years.

When the research team analyzed data on the good to great companies, they originally left leadership out of the matrix. But Collins’s research team came back to him with overwhelming data that showed there was not only a correlation with the leadership, but what appeared to be a causation. Well, you had me at leadership!

Collins took it a step further and analyzed the leadership present during the good to great transitions. As Collins’s research team looked at many pieces of data, some specific traits of the company leaders began to emerge. As a person that researches and teaches leadership, what was revealed was not surprising to me at all. Collins dubbed these leaders as, LEVEL 5 LEADERS. What was a bit surprising was that the good to great leaders had only two very distinctive characteristics in common:

1.     Humility
2.     Unwavering Resolve – an unquenchable and relentless desire for the entire company to be successful

Let’s break this down shall we? Humility. No one wants to work for a conceded boss – at least I do not. I once had a captain (many years ago) that would only talk about himself and his accomplishments. He did some great things, but he would never discuss the life and achievements of the person he was talking to. It got old very quickly.

Some supervisors will confuse confidence with arrogance. They are the types that feel they need to always talk in any situation, especially meetings or professional settings. These supervisors often miss out on good information because they engage their mouths more than their ears. But the humble supervisor does not wish to “peacock” or constantly talk about their achievements. The humble supervisor lets their achievements, work ethic and work quality speak for itself. As Collins put it, it is the difference between a “show horse” and a “work horse”.

The second element of the good to great leaders was their relentless passion to achieve their objectives. Collins stated, “Level 5 Leaders are fanatically driven, infected with an incurable need to produce results”. We have many names for this characteristic – passion, drive, determination, spirit, etc. This makes perfect sense. Good to great leaders are able to keep their eye on the prize and develop systematic steps to get there. But what separates them from other leaders is their drive to reach that prize. Anyone can develop a strategic plan, but true leaders keep the team focused and push until the prize is achieved. In Robert Sutton’s book, Good Boss, Bad Boss, He calls this characteristic “grit”, and he lists it as one of the top five characteristics of good bosses. 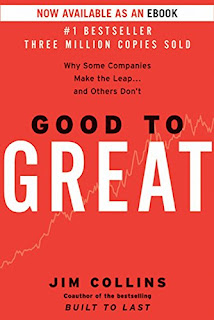 Another interesting characteristic he discovered was that roughly 90% of the good to great leaders were developed or promoted from within the company. This element made me think about leaders within a police or corrections organization. It seems that sometimes, a town or city council will want to “shake things up” and seek a replacement Chief from outside the agency. I realize that sometimes there is no other option. An agency may have a young and inexperienced staff and no one is truly ready to step into driver’s seat. But given this data from Collins, I would caution town or city administrators to look inward at the people within the agency and first seek the “diamond in the rough” before looking outside the agency.

As you can imagine, I highly recommend this book. Thank you, Jay, for recommending it. Its usefulness can be seen in pretty much any industry, public or private. A link to purchase the book via Amazon can be found below.